The Electric Vehicle Evolution From the 1800s to Present 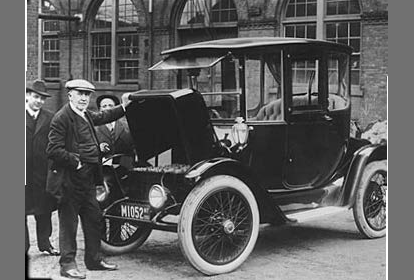 Electric vehicles are a growing market for new car purchases with more and more people making the switch from the gas station to an electrical outlet to fuel their vehicles. Electric vehicles use electricity as their primary fuel or use electricity along with a conventional engine to improve efficiency (plug-in hybrid vehicles). Drivers are purchasing the vehicles for all kinds of reasons. Many decide to buy when they hear about the savings. Drivers see around $700 in savings a year in gasoline expenses when they drive an average of 12,000 miles. They also can realize substantial tax credits that encourage low-emission and emissions-free driving. Additional benefits include environmental improvements because of reduced vehicle emissions, energy independence by way of using locally-generated electricity and high quality driving performance.

This trend toward electric vehicles is expected to continue, especially with the billions of dollars that auto manufacturers are investing in these new vehicles. The list of manufacturer support is long with almost every large automobile manufacturer currently developing or selling an electric vehicle. But how and why did this all get started? Let’s step back and take a look at the history of electric transportation.

EARLY SUCCESS
Electric vehicles actually have their origin in the 1800s. The first American electric car was developed by William Morrison in 1891. His six-passenger wagon reached a top speed of 14 mph (though it is worth noting that in 1899 the land speed record was set by an electric vehicle at 66 mph). Morrison’s invention was considered the first practical example of an electric vehicle, and it spurred interest in electric transportation. The end of the 19th century and the beginning of the 20th century saw great progress for electric vehicles. In fact, electric cars made up close to 40 percent of the U.S. market share at one point, and electric taxi fleets were transporting passengers in both New York City and London. These cars were known for their smooth and quiet rides, unlike their steam- or gasoline-based counterparts, and they were also easy to drive and maneuver. Early gasoline cars required a hand-crank to switch gears, which was a hassle and potentially dangerous. Electric vehicles quickly became the transportation method of choice, particularly for short trips around the city. Hybrid electric vehicles also appeared at this time. For example, Woods Motor Vehicle Company produced the Dual Power with both an internal combustion engine and an electric motor. For speeds below 15 mph, the electric motor was used, and beyond that (and up to 35 mph), the conventional engine took over.

THE FIRST CHARGING STATIONS
So how did these electric vehicles get charged? At least one public charging station existed during the beginnings of electric transportation. In the early 20th century, General Electric produced the “Electrant,” which offered street charging in New York City. Electric vehicles could also be charged at the dealer’s own charging location, and batteries could be removed and charged separately. With more and more city homes being wired for electricity, home charging setups were developed as well, and personal charging equipment could be used for both DC and AC service. However, the process was much more involved and the setup less maneuverable than it is today.

BUMP IN THE ROAD
Despite the early popularity of electric vehicles, they began to disappear from the streets after just a few years. A number of events triggered this decline. For one, roadways improved beyond the city limits, and people wanted to get out and explore. With their slower speeds and shorter ranges, electric vehicles were not ideal for this type of travel.

At the same time, gasoline cars began to improve. In 1912, Charles Kettering designed the electric starter, which eliminated the need to manually hand crank vehicles and provided safer and more efficient travel. Furthermore, technology enhanced the internal combustion engine, and Henry Ford pioneered the Model T, which was both accessible and affordable. Declining gas prices made gas-based vehicles even more appealing, while electric models continued to be expensive. Indeed, they could be two-to three times more expensive than gasoline cars. By 1930, electric vehicles had basically vanished from roads.

BACK ON TRACK
Interest in electric vehicles made a bit of a resurgence in the 1960s and 1970s, but it wasn’t until the early 1990s that a more substantial push for driving electric was realized. This surge was mainly driven by regulations, acts and legislation, such as the California Air Resources Board, which pushed for more fuel-efficient and emissions-free vehicles. In 1996, General Motors (GM) developed the first mass-produced all-electric car, the EV1. The EV1 had a range of approximately 60 miles and a top speed of 80 mph. By 2002, though, GM discontinued the EV1. The California Air Resources Board mandate had been weakened, and GM viewed electric transportation as an unprofitable sector of the market. Other electric vehicles of the time saw similar fates.

Approximately half a decade after the EV1’s discontinuation, GM was looking to re-enter the market, along with other large automobile manufacturers, such as Nissan. Elon Musk and Tesla Motors (which was founded in 2003) were in the midst of producing their Roadster, an all-electric sports car that could travel 200 miles on a single charge. With renewed and reinvigorated interest, the focus centered on producing mass-market and affordable electric transportation. GM began working on the Chevrolet Volt, a plug-in hybrid electric vehicle with both a battery and small gasoline engine, and Nissan was gearing up for the LEAF, its all-electric car. With continued competition and improving technology, electric vehicles seemed back on track.

PLUGGING IN
With renewed growth of electric vehicles, there was also an essential need for charging infrastructure. In a way, history was repeating itself with this aspect of vehicle progression. In the early 20th century, during the first dip in electric transportation and rise of gas-based cars, the number of gas stations was relatively scarce. Drivers needed to memorize the locations of gas stations when planning a trip, before they started popping up more frequently in the 1930s. Likewise, just two decades ago, electric vehicle charging stations were virtually nonexistent, but they are quickly becoming more and more numerous. Today, just like a century ago, people primarily charge their vehicles at home. At the same time, though, there are now tens of thousands of charging outlets in the U.S. Stations come in three different levels: AC Level 1, AC Level 2 and DC Fast Charge. AC Level 1 charging, which uses a typical 120-volt outlet, provides about 3 to 5 miles per hour of charge, AC Level 2 charging can supply 10 to 20 miles per hour of charge, and DC Fast Chargers can charge a car up to 80 percent in about 30 minutes. Tesla has built and installed its own line of Superchargers, which can add up to 5 miles of range per minute of charging.

THE ELECTRIC VEHICLE EVOLUTION
Electric vehicle charging stations are still far outnumbered by gas stations, and charging at an outlet still generally takes more time than fueling at a gas pump, but their rapid growth is promising for the future of electric transportation.