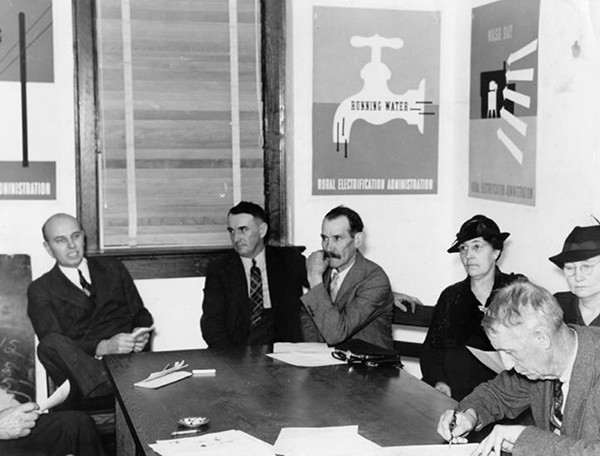 Blue Ridge Electric Membership Corporation has come a long way since 1936 when the cooperative's power lines were energized to light up the landscapes of our beautiful rural northwest North Carolina counties.

Life in the days before the late 1930's was dark and filled with manual labor from dawn to dusk for rural folks. While electricity had come to many towns and cities, it remained elusive in more distant areas because existing utilities found it unprofitable to bring it to rural areas.

Little did we know in 1935 that life would soon change for areas like ours when President Franklin D. Roosevelt signed into creation the Rural Electrification Administration (REA). This action recognized that support was needed to help rural areas become electrified. But it was the self-sufficient, enterprising residents of rural areas who worked together—many by the sweat of their brows—to form cooperatives and bring electricity to their homes, schools, churches, farms and businesses.

How people formed their cooperatives and brought electricity to rural areas is one of the nation's greatest examples of economic democracy. Men and women petitioned, educated and organized to bring power to their communities. They drew lines on rough paper maps and secured signatures for sign-ups. They obtained pledges of land for the paths of the lines so the cooperative could build powerlines to serve them and their neighbors. Line crews, often aided by eager members in the community, cleared rights-of-way and dug holes, while others followed with poles and hardware. Last came the crews to hang the line.

The official "birth" of Blue Ridge Electric was recorded on September 19, 1936. It was that day a small group of farmers met with G. F. Messick in the jury room of the Caldwell County Courthouse to organize what was then called Caldwell County Electric Membership Corporation. This same year, the movement for cooperative rural electrification was in such high demand all across the country that Congress passed legislation making the REA permanent with provisions for cooperatives.

By 1938, Blue Ridge Electric began serving its first members under the name of Caldwell Mutual Corporation: 155 homes, six stores, four churches and a few schools in Caldwell County. Later that year, Watauga County was energized by the cooperative and by the following year, Alleghany County saw its first wondrous glow of lights. Two years later, the cooperative rechartered under the name Blue Ridge Electric Membership Corporation which now serves some 77,831 meters over approximately 1,525 square miles.

A second for-profit subsidiary, RidgeLink, LLC, was established in October 2008. RidgeLink was formed to help Blue Ridge Electric provide value to its membership by more fully utilizing the fiber optic system the cooperative has put in place for its electric system. The company provides broadband and telecommunication services to other businesses that provide end-use internet access services. 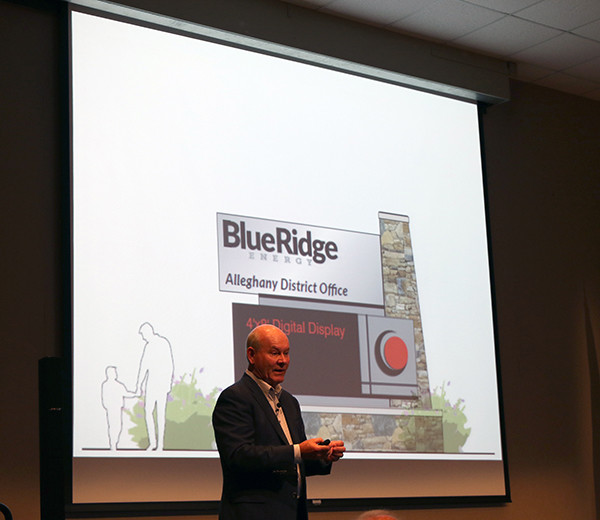 Because the energy landscape is evolving and new technologies are becoming available, our consumers need an energy company that can help them understand how these exciting new energy solutions fit into their lives. To do that, Blue Ridge Electric Membership Corporation made some fundamental changes in October 2016. The first change was our new name—Blue Ridge Energy—as our cooperative and propane and fuels subsidiary began operating under one brand.

The new Blue Ridge Energy is your complete source for innovative energy solutions, encompassing both your member-owned electric cooperative and our propane and fuels subsidiary. We’re expanding our offerings to give you more ways to improve your life and as the energy landscape evolves, we’ll help you understand how new technologies and solutions can best serve you. As always, we’re here as your trusted energy advisor and to make life better for those we serve!

Today, this cooperative still provides essential power to an evergrowing Northwestern North Carolina. While we have progressed and continue to prepare for the future, Blue Ridge Energy remains committed today to the same principles upon which cooperatives were founded. Owned by the members we serve, we are a local business formed to provide affordable access to electricity. We return any margins in the form of capital credits to our members, and the cooperative is governed by a board of directors elected by the membership. The mission is to provide reliable and affordable electricity and energy services. Our guiding purpose is to be a major shaper of the future in our area which results in people achieving new levels of economic prosperity. That's the higher calling of an electric cooperative like Blue Ridge Energy. And that's why we're proud to be a part of all the communities we serve.