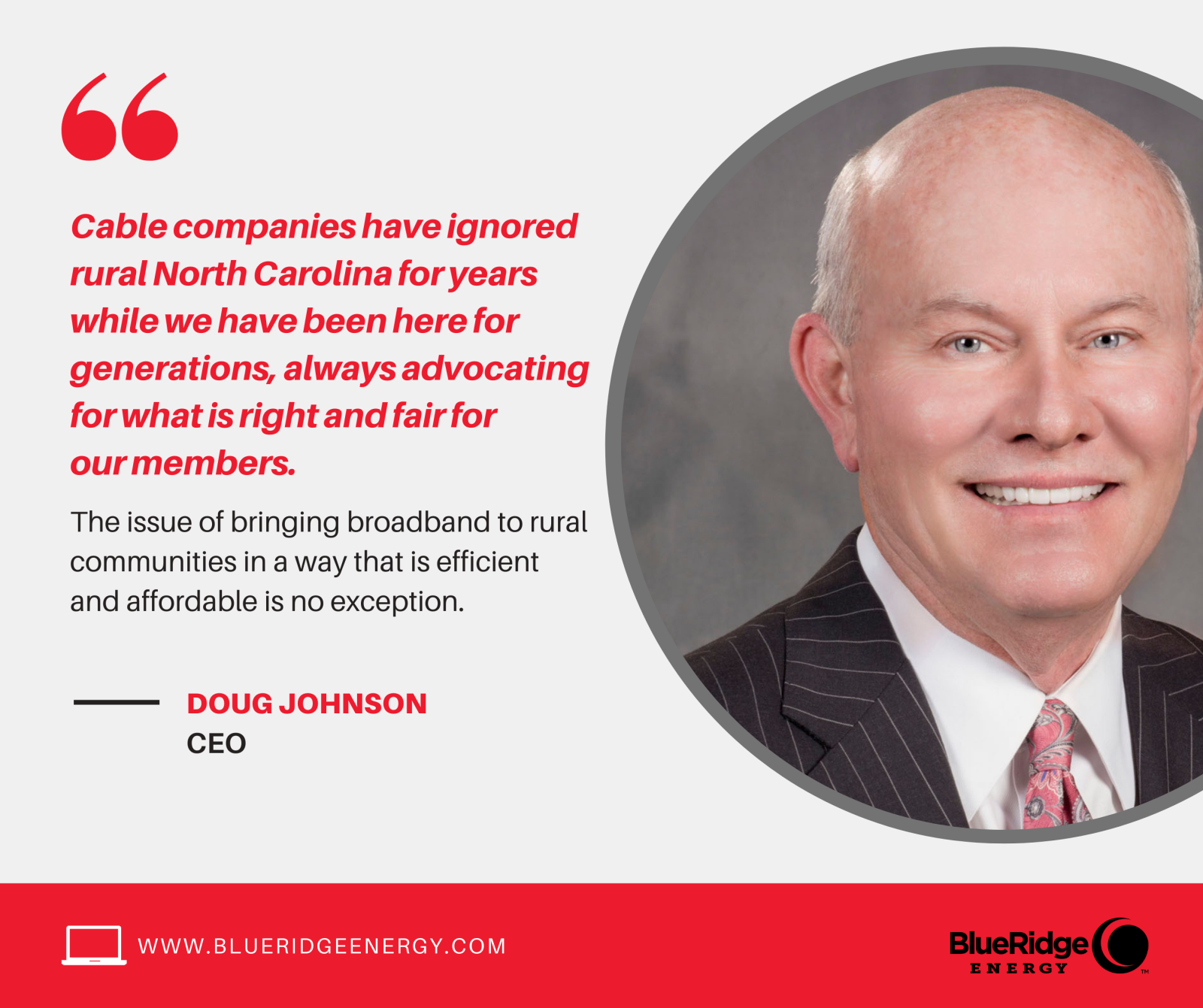 Rural North Carolina needs better access to broadband internet; all of us who live here understand that deeply.

But what are those commercials not saying? That cable companies want electric cooperatives and members to foot the bill for broadband deployment.

To deploy broadband, cable companies add equipment and string fiber on cooperative utility poles. When a pole is incapable of safely accommodating their additions, the company can request that the pole be replaced. Under current law, cable companies pay the full cost of replacing necessary poles.

They want to change that and are pushing a proposal at the North Carolina General Assembly that would require co-ops and members to foot the bill for replacing and upfitting poles. This would reduce their costs and increase their profits at our members’ expense, which is especially troubling considering there is more government funding available than ever before to support broadband infrastructure.

This profit-driven proposal would raise electric bills for Blue Ridge Energy members and co-op members across our state’s rural communities. As cooperative businesses, we are different from for-profit companies that drive profit to benefit shareholders; our service is provided at cost, which means any additional expense to the co-op is really an additional expense for co-op members.

Blue Ridge Energy and all of North Carolina’s 26 electric cooperatives have fought for our members for more than 80 years on issues that impact rural people, pocketbooks and our ability to serve communities with affordable, reliable and sustainable electricity.

When it comes to broadband, we have been working diligently with partners and the General Assembly to close broadband gaps in ways that are efficient and affordable.

In fact, we applied for and received a GREAT grant to bring broadband to 400 homes in northeastern Caldwell County that currently do not have access to high-speed internet access. Once our RidgeLink subsidiary has the fiber optic network installed, SkyLine/SkyBest will be offering service to this area. Additionally, Watauga County recently announced it will be awarding $7.7 million to Blue Ridge Energy and SkyLine/SkyBest to bring fiber-optic internet to more than 1,700 homes and businesses in unserved communities in Watauga County.

This year, we also worked with lawmakers to propose an accelerated timeline for replacing utility poles because we know firsthand how important it is to make this service accessible to underserved areas.

There is no indication that the cable companies have similarly volunteered to accelerate their deployment of rural broadband to unserved areas.

Cable companies have ignored rural North Carolina for years while we have been here for generations, always advocating for what is right and fair for our members. The issue of bringing broadband to rural communities in a way that is efficient and affordable is no exception.

Doug Johnson is the chief executive officer of Blue Ridge Energy, an electric cooperative serving some 78,000 members in Caldwell, Watauga, Ashe and Alleghany counties as well as parts of Avery, Alexander and Wilkes counties.